ECB rates are on the rise what does this mean for mortgage holders?

Interest rates and the European Central Bank are back in the news this week with the announcement on Thursday of a further 0.75% increase in the main ECB Refinancing Rate. This is the rate that the ECB use when providing liquidity to the banking system throughout Europe. It is therefore used widely as the basis for deposit and mortgage rates.

Before we delve into what this means for Irish borrowers, it is worth looking back over the past 20+ years, and the evolution of this lending rate. The ECB use this rate to control economic activity and inflation. One of the key mandates of the ECB is to keep European Inflation around 2%. As the ECB is primarily controlled by the larger European Countries, and Germany in particular, it pays very close attention to inflation. Germany suffered hyperinflation following World War II, and they will do almost anything in their powers to avoid that happening again. This has led to very cautious actions by our Central Bankers when there is even a small threat of higher inflation. Increasing interest rates dampens economic activity, as leverage being used to fuel growth and expansion becomes more expensive. It also encourages businesses and individuals to save rather than spend. Figure 1.1 shows the historical rate, which was stable from June 2000 until June 2008, at 4.25%. Rates then fell quickly as the global banking crisis took hold and the world moved into Recession from 2008 to 2011. Other than a brief increase in 2011, rates were reduced consistently, in order to stimulate the economy, until December 2015, when they reached 0%. They stayed this low until July 2022, benefiting all those on variable or tracker rates. 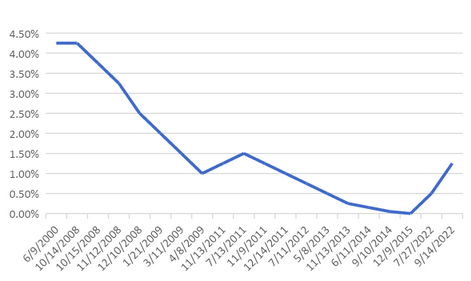 As we know, the economic climate has changed this year, with inflation rates rising very quickly. Although the inflation rate seems to have moderated slightly this month, the current rate issued by the Central Statistics Office on Thursday, is still at 8.7%. We see similar levels throughout the Eurozone. It is this rapid increase in inflation that has led to two interest rate increases in the past two months, with the ECB rate now at 1.25%. For those with a tracker mortgage, their effective mortgage interest rate from 14 th September will based off this rate. For example, those with a tracker margin of 0.75% above ECB, will now be paying 2% on their mortgage from next month. While those with Variable rates may not see an immediate change, it is expected that Irish banks will pass on at least a portion of this rate rise now.

So how does this impact on your monthly repayments? I will examine the immediate impact for a Tracker mortgage holder first, and then try to estimate what might happen for those on Variable Rates. A typical repayment tracker mortgage of €250,000, with 15 years left to maturity, will experience a monthly repayment increase from €1,468 in June, to €1,606 in October, or €138 per
month. Interestingly, over the term remaining, this is an increase of over €25,000 on the total interest paid. For Variable Rate holders it isn’t quite as clear cut. Banks are not obliged to increase variable rates in line with the exact ECB increase. Some of the Irish Banks didn’t pass on any increase in July, but most are expected to pass on at least a portion of this latest 0.75% increase.
So, the question we are getting asked on almost a daily basis now is what to do next. Should borrowers fix their rates or not?

Unfortunately, it is notoriously difficult to predict future interest rates. The ECB are walking a tightrope, trying to balance inflation and economic growth. If they raise rates too quickly, and too steeply, they may deepen any upcoming recession, but they have publicly declared that they are willing to lead us into some level of recession in order to get inflation under control. They are hoping this will be a shallow recession with a quick recovery – the fabled ‘soft landing’! This current increase of 0.75% is an unusually large one-off increase, and some commentators hope they are ‘front-loading’ the increase to give a short, sharp shock to the financial system. For those watching closely, a falling inflation rate will indicate a lower chance of further rate rises, and the latest fall in the inflation rate in Ireland is encouraging on this front. Energy prices are a key influencer, and we are facing difficult times in terms of European energy supply which won’t help. Most analysts and commentors expect inflation to reduce throughout 2023.

Our advice is always to review your overall financial plan. For those who are struggling to meet monthly repayments, the certainty of a fixed rate may help with budgeting and stress levels. For those with variable rates or trackers, there are always options. We may be entering a time where it makes sense to pay down debt with savings, instead of investing the funds. Fixing a mortgage removes the ability to overpay or change the terms, so it is not a decision to be entered into lightly. On balance, I still believe a tracker mortgage will offer better long-term value than the variable or fixed rate alternatives, but in the short term, repayments will definitely be more volatile. I would recommend speaking to a good independent financial planner, who can give you balanced advice on what is best for financial future when weighing up the long-term benefits of saving, clearing debt,
switching mortgages etc. There is much more to the decision than just refinancing or selecting fixed rates over variable rates.

This article was originally published on Journal.ie September 9th 2022

Collection & Use of Personal Information

By submitting your data, you are providing us with some level of personal information. This information is not stored on our website database. However, in order to respond to your enquiry, your data is emailed to our website email address where it is saved. Additionally, we may use your contact details to send you marketing material in the future. You may unsubscribe from any emails you receive following our first reply. We do not pass your data on to any third parties.